Having students create their own work is a wonderful way to immerse them in the production process.  Creating a system with enough structure to give students writing, directing, performance and management opportunities is the key to a successful show. I’m going to talk about ideas for evolving that structure.

We recently created and produced an evening of One Acts at my school called THE RESTAURANT AT THE END OF THE UNIVERSE with over 130 students participating from three levels of theatre over the course of three nights. It was a great experience, and I believe this was due to the following factors:

Create a dominant theme.Some of our past have included Once Upon A Time, where each piece had to have an element of a fairytale, The Fortune Cookie, where students wrote plays based on fortunes they received on a massive cookie distribution day which involved the entire department, and this year’s Restaurant. The possibilities are limitless. Paint swatches? Tabloid headlines? Street names from their town?

The Restaurant had a menu of items. The students plays had to be titled one of those items, things like “The Cheese Stands Alone” and “Have Your Cake and Eat It Too”.

Consider having your most advanced students host each night in teams of two to four. This cuts down on having to do programs, because the advanced kids can simply announce the acts and it’s great practice for them in working in the variety show genre. You might have two or  four students who are up to the task. We had twelve, four for every night of One Acts.  Another wonderful side effect of this is that you can create stock characters that are available to be used in plays, played by the SAME ACTOR any given night.

With Restaurant, we gave students four options for SERVERS. If they wrote a server, it was understood the server would be played by an advanced student who was hosting that night.  Since we had teams of four, there were four waiters, who had gender neutral names.

The hosts got the scripts ahead of time, were memorized, and it gave a cohesive and wonderful thread to the evening as beginning projects were elevated by the more advanced students’ performances. Since every project had been assigned an assistant, the assistants played the waiters throughout the process, giving these less experienced and less confident performers plenty of time to play and experiment without the pressure to have to go onstage.

Create a set, or limit what sets they can use.  This cuts down on chaos, as inexperienced performers try to navigate the stage for the first time. This year we had a simple restaurant set with three tables, two screens, a “bar” and an offstage kitchen. If any patron  from any play walked into the kitchen, “Italian waiters” would make a great deal of noise (in fauxItalian)  and the patron would rush back onstage embarrassed. This running gag was maintained all three nights and delighted audiences. HAVE THE SET DESIGN AVAILABLE TO STUDENTS FROM THE BEGINNING, AND MAKE STUDENTS REHEARSE WITH IT, particularly if you don’t rehearse in the theatre.

Give a reasonable, but short block of time to produce this project across your classes. We usually do it in three weeks and it’s not enough. I would go for five, especially if you’ve never done it before.

Timeline is as follows: Introduce the project all at once to all classes. Consider teaching standard professional playwriting format,  easily Googleable, which will make it easier to organize scripts, as it is the industry standard and more importantly requires a title and character page, which will help figure out what night things are going if there’s more than one night, and who the waiters are.

One Week Before and the Nights of the Show…

Unless you have a publicity team in place, have a simple black and white poster that can go up around. Put the show in the announcements like any other show. Use social media. Charge a little.  Have a simple plan for concessions.  We sold popcorn this year and it was cost effective and well received by our audience.

Double check that each play knows what night they’re coming, and reinforce calltime. Make the call on the night of early enough that they can rehearse with stock character hosts if they need to, and that any last minute prop or costume things can be solved.  Since you have a theme, if you have stock, pull pieces or props that could easily work in the associated one acts. We had a table of just restaurant props.  We also managed to costume an apocalyptic Western out of items we had lying around.

Be hard on technique, easy on feelings.  For many of your students, this might be their first real time onstage. Be aware of that, but reinforce being seen and heard.  I have found, for instance, that students who don’t know they’re not projecting can be enlightened by going into the audience and having you or an advanced student say their line exactly as they are saying it.

Plan time each night before the show to gather as an entire group and do a warmup.  If you have multiple levels of drama performing, it’s neat to see them all together. This is also where you can identify the students who are running the show that evening, hosts and backstage tech, who should be easily identifiable via dresscode.  At our school, this is the first time beginners participate in some of the sacred “break a leg” rituals we do before shows for luck. Really affirming.

Have a system where performers can watch from the house before and after they go on. One Acts is a great opportunity for people to learn from each other! We ask performers to leave the audience two acts before theirs. Show order is posted on spreadsheets backstage.  A student manager meets them in the green room, holds them there for one, transfers them backstage to another manager, and then on, and quickly gets them out of the backstage when done. It’s like a dip in the pool. 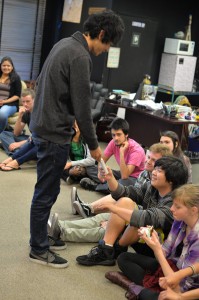